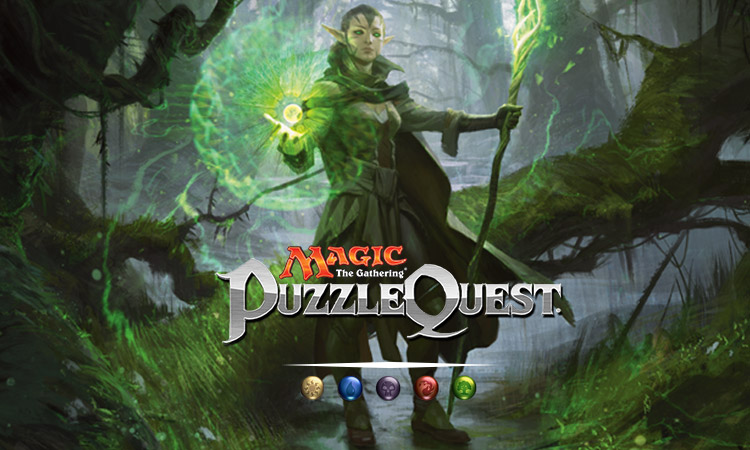 Magic: Puzzle Quest is a puzzle game developed by the well-known company “D3 GO!” which previously published titles such as Adventure Time, Marvel Puzzle Quest or Madagascar – Join the Circus. The game is available only on Android devices and it has already been downloaded for more than half a million times during 2016. It has an average rating of 4.2 out of 5 on Google Play in 2016 and it requires an Android version of at least 4.1 in order to run at optimal parameters.

In Magic: Puzzle Quest you take the role of a leader who use planeswalkers (strong champions who fight in your name) in order to become the most powerful human being. You will face great challenges during your single-player missions and you will test your mightiness against other players in a multiplayer arena. Create the most powerful deck, outplay your opponents during the puzzle stage and be victorious – have you got what it takes?

The game doesn’t require a mandatory sign-up but I strongly recommend to link your Facebook account with your Magic Puzzle Quest account (the game also will suggest exactly this). By doing so, you ensure no data loss in case of changing your device or for any reason uninstall and reinstall the app at a later time. However, if you really don’t want to do this, you can play as a guest for as long as you like.

Magic Puzzle Quest is a complex game so the existence of microtransactions isn’t a big surprise. There are two resources from which one is considered premium (Mana Crystals) and can be purchased with real money. The price for the Mana Crystals varies depending on the amount you wish to buy – the least you can get in a single buy is 100 units of Mana Crystals with $4.99 while the most is 3,000 units in exchange of $99.99. Probably the most popular offline trading card game is Magic: The Gathering while the most popular online trading card game (even though there isn’t much trading involved is Hearthstone). However, since not so long time ago, Magic: Puzzle Quest appeared in the online universe with a slightly different gameplay but with the potential of contending Hearthstone’s supremacy.

The most amazing feature I encountered in Magic Puzzle Quest is definitely the game’s concept. You have a merge between a typical puzzle game (where you have to match tiles in order to win) and the classic trading card game ‘Magic’. This idea, in my opinion, is really neat and I haven’t seen it before. Because of this, you will be required to think a limited-deck (you can only have 4 minions at a time on the table) and you will need to prepare the ‘battleground’ so your opponent doesn’t get a mana curve. So, basically twice the challenge and twice the fun.

Also, one other thing is the fact that you can play both multiplayer and single-player. You try different decks and strategies during the campaign and when you feel you have what it takes, you jump to the PvP and clash with your friends and enemies. Don’t worry, a leaderboard will prove who is better. Another great thing about Magic Puzzle Quest is probably the fact that you can use more than one planeswalker and you can shift between them – this basically gives you the opportunity to experience with different abilities. Another great thing about Magic Puzzle Quest is that you get boosters (card packs) just like in real life and that even though paying users have a certain advantage, the advantage is not unfair.

Here comes the part where I say what I don’t like about Magic Puzzle Quest or what I would change if given the opportunity. First of all, I think that Magic Puzzle Quest is a title with unreasonable hardware requirements. Most of the medium-range devices will struggle with this title and I don’t really understand why. There are games where high-end graphic engines are used and the requirements are not this high. I believe that some optimization should be done. Secondly, one thing that can hurt the game’s popularity is the rather slow tempo of the game.

It is great that you have basically 2 games in 1 but the mana costs for the trading cards or even the trading cards should be rebalanced. Games with cards are meant to be played slowly (they are like a chess match) but ultimately we are talking about a handheld device title. Last but not least, I believe that the game, at its current state, feels unfinished. You can finish the campaign in about 3 hours and the PvP is not really appealing yet because there aren’t many players. The developers promised that they will add much more content in the following weeks but I don’t think it’s great to release a game if it is not finished. If I were in charge of this, I would select a bunch of players as beta testers and I will release the full version of Magic Puzzle Quest once everything was in order (just like PC games are doing).

Overall, Magic Puzzle Quest is a game I would definitely recommend. It doesn’t really matter if you are into trading card games, this title is unique and you should definitely give it a chance. There are still some problem here and there but I am optimistic about its future. Artwork: Magic Puzzle Quest gets a rating of 7 out of 10 for its artwork. The game doesn’t focus on graphics at all and even though it may deserve a better rating at this department, we must be objective about it and point out the fact that there aren’t great animation effects, no 3D character design or no realistic graphics. With that being said, all is left are the good things – the UI and the layout design are great and they really reflect a dark-fantasy theme, the cards are well-designed and they look amazing and the puzzle is one of the best-looking puzzles I’ve ever seen. The developers did a marvelous job.

Music & SFX: I give Magic Puzzle Quest a rating of 8 out of 10 for its music and sound effects. The soundtrack is really cool and it provides a great atmosphere to the player. The songs are dark and a bit dramatic but that fits perfectly with the theme. However, adding one or even two more would have been better. The sound effects are also interesting and they have their fair share of contribution to the atmosphere as well. Taken as a whole, the game sounds good and you can’t complain about anything except variety – the developers did a more than decent job.

Story/Originality: The game gets a rating of 10 out of 10 at this section. As I mentioned before, the most popular card-game that doesn’t involve classic playing cards is Magic: The Gathering. Having a replica on your handheld device is something amazing but that doesn’t stop here. In Magic Puzzle Quest, you need to solve puzzles (Candy Crush-like) in order to summon your desired cards. As I mentioned before, this is the most unique game I’ve ever played on a mobile device since I started doing it. There is no question allowed about authenticity or originality – the game is the foundation of many others. You also have an intriguing campaign which follows a dark yet interesting story.

General Gameplay: I give Magic Puzzle Quest a rating of 8 out of 10 for its general gameplay. If you don’t understand why you have to play a fairly long tutorial, bear with me and just do it. After you finish it, you will realize you only scratched the surface and that you discovered one of the most complex titles on the market. The game will definitely overwhelm you at some point but with patience and with google skills, the mystery will be revealed. The controls are great and the developers tried to make the layout as intuitive as possible. For the time I’ve played I haven’t encountered any major bugs, freezes or crashes.

Addictiveness: Magic Puzzle Quest gets a rating of 9 out of 10 at this section. A card game, no matter how boring the action is going to be will still be considered addictive because of the card collection. Everybody knows that collectors will not stop playing until they got all the cards. Fortunately, in this game there is more than just card collection so you will literally don’t get bored if you are into this genre. There are both multiplayer matches and a campaign mode, there are dozens of heroes and hundreds of cards and the developers promised a lot of updates in the following weeks. What more could you wish for?

Overall, Magic Puzzle Quest gets a rating of 8.4 out of 10. There aren’t many card games on the market and definitely there aren’t any card-puzzle ones. People usually love or hate Magic titles but I believe that the user-friendly approach this game has will be benefic. Hearthstone, you should watch your back…a challenger has arrived.