Age of Ishtaria Tips and Cheats 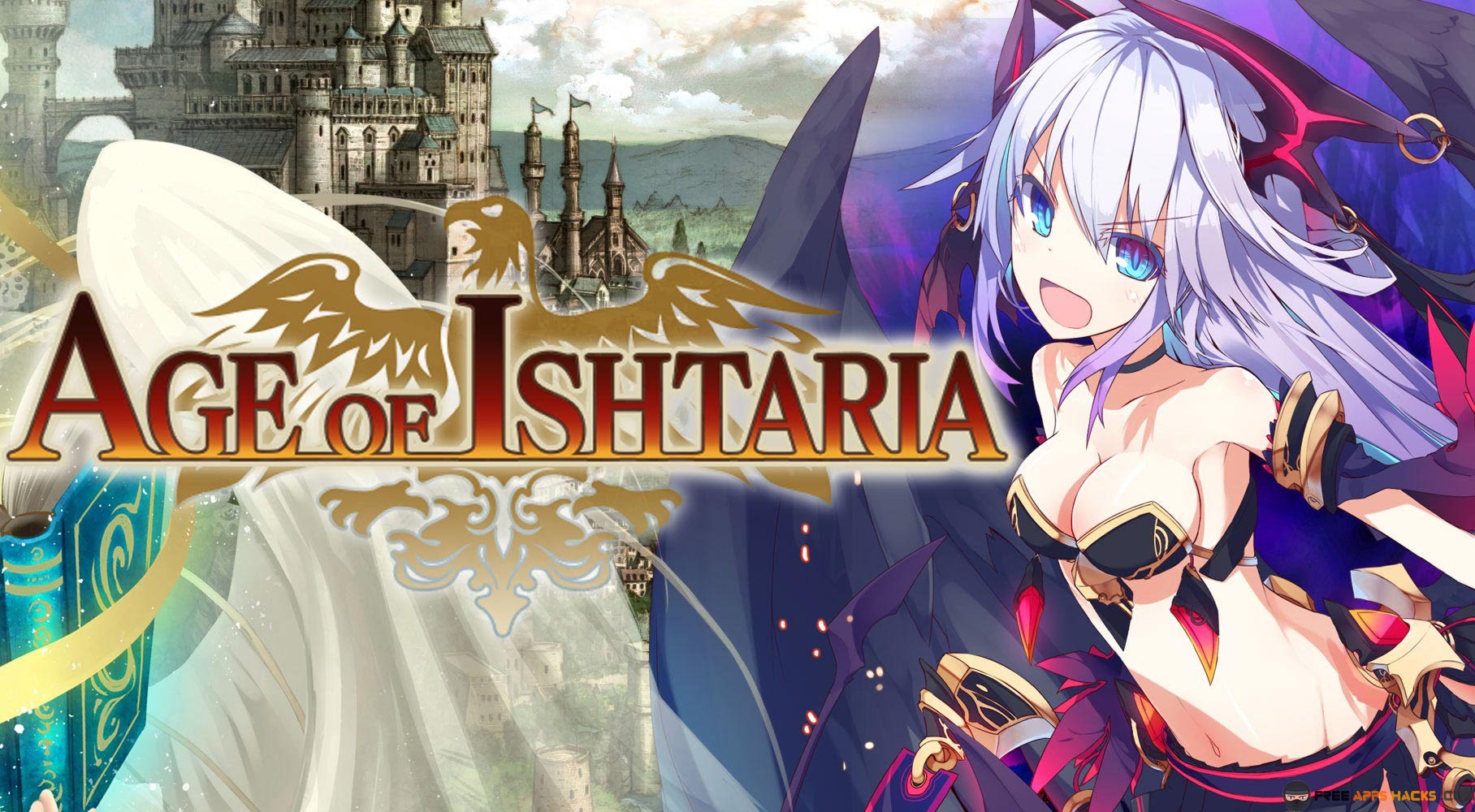 Age of Ishtaria is a Role Playing game developed by Silicon Studio, a company known for other games and apps such as Grand Sphere, Pixel rain or Mobile GPUmark. The game is available on both Android and Apple and it has been downloaded for about 2 million times. It has an average rating of 4.3 out of 5 on Google Play and 4 and a half stars from a maximum of 5 on Apple’s App Store. In order to run at optimal parameters, Age of Ishtaria requires an Android version of at least 4.0, or for Apple users, iOS 5.1.1 or later.

In Age of Ishtaria you take the role of a servant which has to take back the lands stolen from his/her master. It may seem odd but that’s the way it is. In order to achieve this, there are hundreds of units you can choose from, thousands of possible card combinations and hundreds of combos your troops can perform. It is one of the most complex games I’ve ever seen (at least for mobile devices) and it can be pretty hard to understand so you really need to have patience.

The game doesn’t require a mandatory sign-up but I strongly recommend it in order to ensure no data loss in case of changing your device or uninstalling and then reinstalling the application. You can register a new account from the Settings or, if you prefer, you can link your Facebook account with the game. After you do this you will receive a small token of appreciation and the possibility of accessing your account from any device capable to run the application.

Age of Istharia is a complex game full of shopping options – items, potions, deck cards, boosts and so on. Fortunately, there is only one resource that acts as a currency too (called Crowns) and that is used to buy all this stuff I’ve mentioned. If you desire, you are able to buy the esteemed Ishtaria Crowns with real money. The price for them varies starting with $0.99 in exchange of 100 Ishtaria Crowns and going up to $49.99 for 5,000. Cheats & Tips for Age of Ishtaria Age of Ishataria is one weird little game. On one hand, I was really intrigued by it and on the other hand I was worried that I will have to review a game I hate. At the beginning, I really considered Age of Ishataria something I will not find enjoyable because I felt overwhelmed by it. However, soon enough, I found myself enjoying it.

The thing I like the most about Age of Ishtaria is the fact that the game is very complex and it has one of the best multiplayer implementations I’ve ever seen for a mobile device app when you talk about co-op missions. In addition to this, almost every event is team-oriented and that’s a great idea – users required to team-up and give up on the saltiness is a thing I love to see in any multiplayer game.

I mentioned that I am a fan of this multiplayer events but I must say that the campaign is pretty solid too – there are a lot of missions available and even though they may seem repetitive, you will have fun with them (after you learn some combos). I was pleasantly surprised by the idea of writing a review for the game in exchange of a golden summon. It’s not much but it’s a great idea to see a game “wanting” to be honestly reviewed rather than a “Give us 5 stars or you will face a merciless death” message.

There are a few things I don’t like about Age of Ishtaria as well. First of all, the biggest issue the game has is the genre mix. I mentioned before and I will probably mention it again – it is hard to find the right player for this kind of game even though you have a lot of interesting elements and the potential to be one of the best RPGs on the market. If the player sees a mix-up of RPG with Anime and Turn-based cards game and he doesn’t like the idea he will move on to the next one. Secondly, I really hate that the “union” part is not explained better.
As a matter of fact, there are a few elements that are explained properly in Age of Ishtaria. This problem damages the user-friendliness of the game. Lastly but not least, I would have expected a more developed item system. You consider yourself an RPG and yet your focus is on the cards not on the equipment and crafting system. That’s a pretty odd choice in my opinion.

Overall, Age of Ishtaria is a peculiar game to recommend. If you like Anime or turn-based card games or RPGs you may like it. If not, the chances are pretty low. However, if you like all 3 genres, the game may easily become your personal favorite. The choice is yours. Artwork: The game gets a rating of 7 out of 10 for its artwork. Don’t get me wrong, Age of Ishtaria is a very modern looking game but it lacks something essential: character design. You have enemy opponents, that’s true, but your “champions” (or whatever they are) are just 2D cards with faces drawn on them.
And that’s not very modern. The environment is also really static because basically Age of Ishtaria is a fancy-looking mobile board game. Also, the animations effects, with a few exceptions (the special combos) are pretty bad as well. It is impossible to give the game a high rating even though “400 Units are hand drawn by incredible illustrators”. However, the anime theme the game has is really interesting and it’s presented nicely.
Music & SFX: Age of Ishtaria gets 9 out of 10 at this section. Well, I said about artwork that is bad and you probably expected that the music will be the same too. You got that wrong. This game has one of the most complex soundtracks I’ve ever heard. Even though I am not a fan of this optimistic childish loud music, it matches perfectly with the game’s theme and that’s what matters after all. The sound effects are really interesting and that include the voices of the characters – it is a foreign language that you will probably don’t understand but you can hear them loud and clear.
Story/Originality: The game gets 9 out of 10 for its story and originality. Being an RPG game is obvious that Age of Ishtaria has a story and fortunately it’s a decent one. It is created like an Anime would be so you should expect a lot of weird and unrealistic stuff but that’s just because of the theme so you can’t complain.
However, where Age of Ishtaria really shines is when you are talking about originality. I mentioned before the fact that the game is a unique mix of 3 different game genres so it is almost impossible to consider it unauthentic. Being weird is not necessarily bad so this app can be considered a nice surprise.
General Gameplay: Age of Ishtaria gets a rating of 6 out of 10 for the gameplay. The game is so overwhelming it will confuse even the most hardcore mobile devices player out there. You have dozens of elements that are explained to you in seconds. There are a lot of different complicated combos, each type of attack reacts to the previously used one and so on.
I honestly had to check Google from time to time to understand how to play Age of Ishatria. The game is way too complicated for a mobile device and I am not really sure people will appreciate it at its true value. For the time I’ve played I haven’t encountered any bugs, freezes or crashes.
Addictiveness: I give the game a rating of 8 out of 10 for its addictiveness. Even though Age of Ishtaria is a really complex game full of different characters, events, daily rewards, a crafting system and so on – shortly said, everything a game is required to have to be considered addictive – there is a big problem with it. Generally, RPGs are niche-oriented meaning that only a small but loyal base of players will enjoy it. Age of Ishtaria is not only an RPG – it is a turn-based Anime RPG which is a very risky combination because there aren’t many fans of this trio so the casual users may avoid it.
Overall, Age of Ishtaria gets a rating of 7.8 out of 10. The game lacks a lot of essential stuff but it’s really authentic so with a bit of exposure and luck it can become an unexpected very popular title.