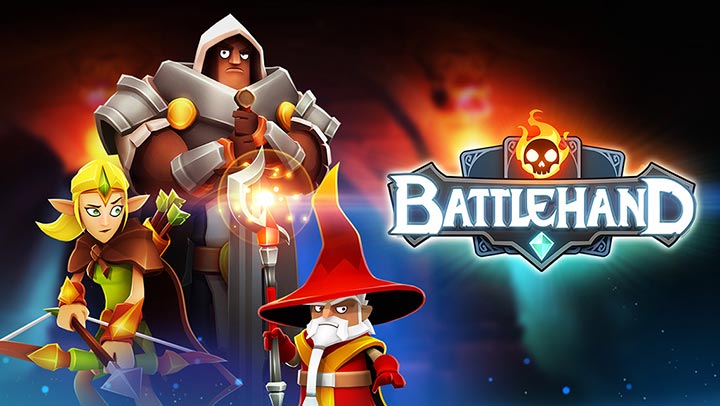 BattleHand is a mobile role playing game developed by the well-known company Kongregate which previously published popular titles such as AdVenture Capitalist, Epic Skater or Little Alchemist. The game is available on both Android and Apple and it has been downloaded for more than 50,000 times already. It has an average rating of 4.1 out of 5 on Google Play and a number of 3 and a half stars from a maximum of 5 on Apple’s App Store but less than 50 ratings in 2016.

In BattleHand you take the role of a young brave warrior who needs to team-up with old wizards and learn all their secrets in order to save the world. Your foe will be Queen Amethyst a ruthless witch who summoned long-forgotten beasts into your realm. Prepare yourself for an adventure full of plot twists and turnarounds but which will be interesting to follow.

The game doesn’t require a mandatory sign-up but I strongly recommend to do it, nevertheless. If you are an Android user you will be able to sign-in with your Google+ account and all your progress will be saved. If you don’t wish to do it or if you are not an Android user, you can always sign-in with your Kongregate account (or create a new one) and you can keep your data safe into their cloud for 2016. You will also receive a prize for doing so.

Because BattleHand is an RPG, there is no surprise that it has several microtransactions available. One of the resources from the game is considered premium (Gems) and it can be purchased with real money. The price for Gems varies depending on the amount you wish you buy – the least you can get in one purchase is 250 Gems with $5.99 while the most is 8,000 Gems in exchange of $124.99. Not so long time ago, I reviewed a new mobile trading card game which showed a lot of potential mainly because of the unique gameplay. Now, we are going to talk about another similar title which has a lot of good parts and a decent amount of bad parts as well. BattleHand is the name and the details will come next.

Undoubtedly the most interesting feature of BattleHand I had the pleasure to encounter is the approach on the gameplay. You have your common turn-based RPG where you use different heroes but the plot twist is pretty huge if you ask me – the abilities of your heroes are cards they randomly draw from an own deck. You read that right, each hero has its own deck full of spells. In addition to this, another unique feature the game has – the cost of the abilities is calculated in turns (how many turns does the character require to prepare the spell).

Because of this, every match will be very fast paced. The heroes and the monsters are categorized in five parts each part being an element from the realm. Naturally, each element will have an advantage against one other element and a weakness against another. Another great thing I found in BattleHand is the possibility of upgrading your current cards. If you are unlucky and you receive relatively weak cards you will always be able to make them competitive. Moreover, each hero has a powerful ability which is separate from the cards and that’s pretty nice.

Two other great things about BattleHand is the fact that the game is ad-free and you are able to save your progress in cloud. It may not seem much but nowadays you would be surprised about how many titles forget to add this things.

In the following line, I will explain briefly what I would change about BattleHand if given the possibility, or what I simply don’t like. First of all, probably the most common complaint players are currently have is about the game’s costs. If you wish to play the game without investing any real money, you will realize in a very short time that everything in BattleHand is way too expensive or too weak to be considered good. Having the possibility of choosing whether you spend or not money in a game is great but at least make it fair for everyone.

Moreover, the Gems price is a little bit too high and it doesn’t encourage players to buy them. What I am trying to say is that it is pointless to have a free-to-play title when you are required to pay-to-win. Secondly, another common problem I encountered in BattleHand is somehow related with the previous one. In order to do stuff, you have to use an additional resource called ‘Dungeon Keys’ which basically acts as Stamina (or anything similar). If you want to do a bunch of missions, you will undoubtedly run out of Dungeon Keys and you will need to spend Gems in order to refill them.

Conditioning the player to play for a given amount of time and not allowing him/her to stay in the game for as long as they desire is a bad move if you ask me and it should be ‘purged’ from any game not only from BattleHand. Finally, one other thing I don’t like about this game is the “always online requirement’. I am a lucky person with a more than tolerant data plan but most of the players may not be as lucky as I am. When you don’t have a multiplayer implementation, there isn’t a good reason to not allow the user to play without a permanent internet connection – just my two cents.

Overall, BattleHand is a game that I would probably recommend. A lot of things are unfair with this title but the ‘great everything’ prevails. If you don’t mind waiting for Key Dungeons and watching your heroes slowly progress, you will definitely have a great experience with this title. Artwork: BattleHand gets a rating of 8 out of 10 for its artwork. The theme is really cool because it is a mash-up of two other different themes – cartoon and fantasy. The result is a ‘cartoonish’ colorful theme with dark fantasy elements and it’s looking pretty good. The character design is very interesting and the environment is nice as well (even though I wished for more interaction with it). The animations effects are really cool especially because the game isn’t violent at all – even though you are fighting and killing enemies. And that’s odd in a good way.

Music & SFX: I give the game a rating of 8 out of 10 for its music and sound effects. The soundtrack is pretty interesting because it matches with the game’s theme but there isn’t anything extraordinary about it. The approach of the developers on this title was a little bit satirical and I expected more catchy songs which didn’t happen. The sound effects are hilarious though (you will encounter similar sounds only in cartoons) and they ‘save’ the overall impression of the game’s soundtrack.

Story/Originality: BattleHand gets a rating of 9 out of 10 at this section. The story of the game is a bit dull because it is basically a cliché – bad guy (girl in this case) summons demons and beasts into the world and you need to save it with the help of a weird old suspicious person which have a lot of knowledge about the situation. However, the good thing is that in terms of originality, the games stays in a comfortable spot. A turn-based role playing game with trading cards included in the core of the gameplay isn’t something you commonly see.

General Gameplay: I give BattleHand a rating of 8 out of 10 for its general gameplay. You start the game with a thorough tutorial which will teach you everything you need to know about the mechanics and the story. Because of the ‘trading card’ part, the game may become overwhelming at some point but taken as a whole it can be played almost by anyone (especially because the developers kept the violence in-game at minimum). You just need to have patience and this rule applies for both experienced and inexperienced players. For the time I’ve played I haven’t encountered any major bugs, freezes or crashes.

Addictiveness: BattleHand gets a rating of 8 out of 10 for its addictiveness. The game has almost everything it is needed to be considered addictive – a simple yet challenging gameplay, good looking artwork, a funny and serious at the same time campaign, character progression, the ability of collecting cards and others like that. All of this are hinting to a more than decent title. Moreover, the game has a multiplayer implementation. However, at its current state it feels clunky and not competitive – this should really be solved as soon as possible. With some improvements regarding the game’s monetization, this title can be much more addictive.

Overall, BattleHand gets a rating of 8.2 out of 10. As I already mentioned for several times, trading card games are becoming popular. This title is one of them and it shows a lot of potential. If the developers will keep updating it regularly, it can reach the tops and stay there indefinitely.