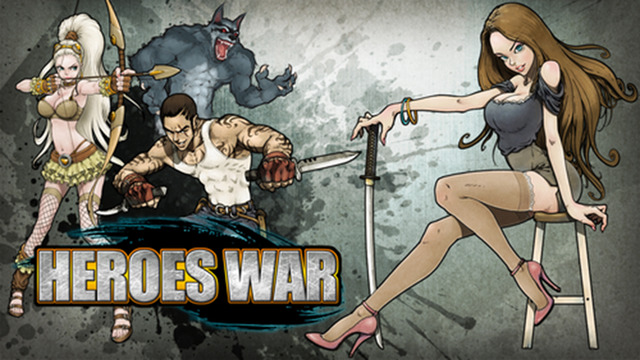 If you want no-frills Final Fantasy-esque fighting with a surprisingly sophisticated battle system and more loot than these guys could ever dream of, Heroes War should be top of your wish list.

With a lengthy single-player mode to complete and plenty of real-world opponents to conquer here, you’ll need to put your best foot forward if you hope to do well in the game.

So, I thought I’d make your life just that little bit easier and put together a guide for you to do exactly that.

Below, then, you’ll find out about hidden bonuses, the easiest way to play for longer, and the quickest ways to level-up. You need to think about the way you approach battles in two different ways. And you need to know why you’re doing so.

The first technique is applicable to battles that you are confident you can win. Here, you should simply tap the fast-forward button and be done with this exercise in grind.

The second technique is applicable to encounters where you can’t skip the fight or you know you’re on the back foot. Take your time with these battles, for you’re not punished for strategically planning your next moves.

It’s in these tougher scraps where you should be thinking ahead and utilising your team’s abilities.

Take the Invisible Man, for instance: one of his “attacks” is a passive status buff that will increase the attack power of all allies by 30 percent for four turns. You should use this move as early in a match as possible, as most battles won’t last past a few turns anyway.

Consider using the Werewolf’s Scar Maker move immediately after this, too, especially on tougher boss enemies. This attack isn’t that powerful in itself, but it will lower the defences of the selected individual for a few turns, making it especially susceptible to your strikes.

Ensure you’re attacking enemies with low health when you can to, hopefully, remove them from play. By focusing your efforts on one baddie, you can do this rapidly. Strangely, the opposing teams rarely use this tactic, preferring instead to spread hits out among your party.

If there are two enemies with roughly similar health, strike the one that is about to take its next attack soonest. If you can kill it quickly, its wait will have been in vain.

Tactical nous is all for nought if you don’t have the right team behind you. This means spending money.

If you’re enjoying Heroes War, you should seriously consider buying the Starter Package for 69p / 99c. It’s a one-time purchase, and with it you get a whole load of currency at a vastly discounted rate.

Now that you’re positively loaded, avoid spending your money on upgrades. Instead, recruit as many characters as you can for your party.

There are two reasons for doing this. Firstly, it gives you more options for heroes to take into battle. Secondly, it allows you to play the game for longer.

Every 60 seconds, your characters have another point of their energy refilled. Consequently, the more characters to which you have access, the longer you’ll be able to play without being forced to quit out of the game and wait for the energy timer to tick by.

When you’ve formed your team, kill your bank balance by upgrading your most powerful equipment and making sure that each character is equipped with the very best items it can carry. You’ll be surprised at how much loot you pick up – just don’t forget to get the maximum use out of all of it. You can, and should, take part in multiplayer battles, forging the most powerful team you can muster to win XP. You’re awarded a bonus for consecutive wins, so make sure you pick opponents that are clearly underpowered in comparison to you. It may seem like a cowardly thing to do, but it’ll enable you to make progress faster.

Recovery Potions are useful for healing your team, especially in harder battles. If you want a load of them for nothing, simply tap on any of the Special Missions to start them and get ready to be rewarded.

Rewards like these are plentiful in Heroes War – just don’t forget to collect them. If you send off a character to assist Silvia, for example, you won’t be automatically allocated the funds in return for its services. You need to manually select the reward from the left-hand side of the hub screen.

Oh, and one last tip that may seem obvious. There’s a “Play Again” option after each battle. Use this to go back and play the battle once more, eliminating the need to go through multiple menus to get to the combat.